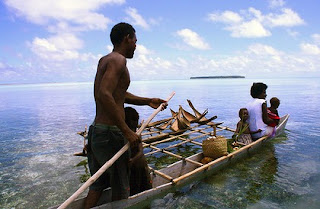 IMAGINE that your home, water and a fair whack of your food are under threat. Imagine it is only going to get worse.

Imagine that you live on the Carteret Islands, seven tiny coral atolls in the Pacific that have been described as the home of the world's first climate change refugees.

Six months ago, the 2700 islanders began what will eventually become a big evacuation to Bougainville, about 80 kilometres to the south.

The decision to relocate followed years of worsening storm surges and king tides that infected the fresh water supply and ruined the islanders' staple banana and taro crops.

Fearing worse is to come — more frequent floods are expected to be the most visible signs of rising sea levels due to global warming — the islanders secured three blocks of coastal land. Five men moved earlier this year to build houses and plant crops, the first step in the relocation of 1700 people in the next five years.

The relocation is being headed by Ursula Rakova, an islander who quit a job with Oxfam in Bougainville three years ago to set up Tulele Peisa, an organisation that raises money and campaigns for social justice on behalf of her people. ''We have a feeling of anxiety, a feeling of uncertainty because we know that we will be losing our homes. It is our identity. It is our whole culture at stake,'' she said in Melbourne yesterday.

The move has been helped by the Catholic Church, which provided the land for relocation, but not the Bougainville Government.

Ms Rakova said the $1thmillion provided by the Papua New Guinea Government in Port Moresby had been swallowed by provincial bureaucrats.

The purpose of her trip to Australia this week is two-fold — to secure a market for the organic cocoa the islanders plan to grow at their new home and to call on the Australian Government, through its AusAID program, to pressure the Bougainville Government to deliver the promised money.

Just as urgently, she wants to see Western leaders take on much deeper cuts in greenhouse gas emissions.

The Australian Government's most ambitious emissions proposal of stabilising atmospheric carbon dioxide at 450 parts per million was not enough to give the Pacific a safe future, she said.

''We are angry. Some people do not understand the science, but they know they are losing their homes and they are angry they are having to pay for what other people [in industrialised nations] have done,'' she said.

While climate scientists warn that the future for atolls like the Carterets is bleak, the extent to which climate change is responsible for their current predicament is unclear.

Campaigners believe the impact of rising sea levels may have been amplified by the gradual sinking of an extinct volcano that supports the atolls.

One of the world's leading sea level experts yesterday called for caution. John Hunter, from the University of Tasmania, said sea level rises would eventually cause ''huge problems'', and called for the building of sea walls to protect the islands' culture and ''buy a few more decades''.

Sean Kidney
Chair of the Climate Bonds Initiative; a director of the Network for Sustainable Financial Markets